In the picture above, Chip, from the 2018 sitcom “Living Biblically,” prepares to live the following day without his smartphone.  Into his glamorous fanny pack and onto his body he dons the analog counterparts which the smartphone has replaced:

He’s got quite the load in that fanny pack.  In the episode he struggles, attempting to navigate the city without his smartphone.  He finally finds his way to the box office to purchase Beyonce tickets as a last-minute gift for his wife for their anniversary, which he forgot, because he didn’t have his smartphone to give him the notification the night before.

The rest of the episode is of course a comedy of errors and misunderstandings, all made right and beautiful in the end.  But, is living analog really practical?  It really depends, I guess.  You may not have to go full-blown fanny pack in order to go analog, but there are definitely some adjustments to live a lifestyle which balances convenience with health.

You might even save a lot of money in the process.  Someone once said ‘a penny saved is a penny earned.’  And while that’s true, one could take it even farther in this era when gardening and farming is the new independence: “Every dollar you don’t have to earn is worth about $1.40, because you don’t have to pay taxes on it.” – Joel Salatin.  So if you don’t have as many expenses due to going analog, you just might have to work less or earn less, and think of what you could do in your spare time and how many dollars you can (not) earn by using that extra time to grow your own food, for example.

Unless you’re going full fanny – you will still likely be using your laptop, so make sure you’re following simple steps to reduce your EMR exposure as well as your blue light exposure.

Every coin has it’s two sides:

For a long time, I didn’t know what to think about some of these alleged consequences or health sacrifices.  For example, I wondered — is WiFi (electromagnetic radiation – EMR) really that bad?  People say that to worry about EMR is completely backwards and stupid —- that we are exposed to more radiation when we walk down the street than what we are exposed to from WiFi routers or cell phones.  While it is correct that we sustain biological oxidative stress constantly (WiFi signals radiating from every home on the block, the utility’s ‘smart’ meters now installed on all of our homes, even radio waves and the electrical wiring in our homes!), it is not true that all of these things have the same effect on our biology.  Some our more harmful than others.

The bottom line, is that we are often wrong when it comes to technology and safety.

There are hundreds of examples, from lead, to DDT, to Teflon, but did you know that up until the 1970s there were thousands of shoe stores who routinely x-rayed people’s feet, adults and children alike, to make people believe they were going to get the ‘perfect-fitting shoe’?

Yeah, it was called a ‘shoe-fitting Fluoroscope.  No one thought it was harmful at the time.  Today, we all know that x-ray radiation STILL breaks and damages DNA, even though innovations have resulted in x-rays with less radiation than was emitted in the past.  But as recent as 1970, the general population considered x-rays harmless enough to continue using for something as mundane as finding the ‘perfect shoe.’   This is just another example of what we are doing each day even now — accepting a variety of technologies into our daily lives without understanding how they are damaging our health.

These missteps are fossils from an ignorant bygone era — they are simply a previous part of a  pattern which continues today, in this century, in this year.  Teflon began phasing out in 2003, and was finally banned in 2014.  Triclosan (the ingredient in antibacterial soaps and antiseptics), was banned Dec. 20th of 2017.   The battle against flame retardants still continues though there are over four hundred peer-reviewed studies showing they cause cancer, and though the Chicago Tribune exposed their uselessness…and they are still in our foam and textiles and electronics and thus, in the dust bunnies in our homes, and in us.  The battle to end fluoridation also continues…and the FAN network is setting new precedents in this battle with their lawsuit against the EPA as we speak.  We bet we could create a pretty large encyclopedia of all of the things we need to change.  But don’t let the vastness get you down.  It’s about participating and making changes where you can, and improve your quality of life in the ways that are most important to you – because success often depends on the interests and passions we have.  Just begin somewhere, and don’t wait.   And don’t forget to have some fun….

All of this can be difficult to grasp and take action on all at once, and it can be hard, at first glance, to find an answer to even one of the questions – what are the true risks of EMR?  …but the information can be found, and more research is being released each month.  Cece Doucette, an amazing activist in Massachusetts, publishes simple but informative videos on YouTube, some with the help of her local PBS station.  She also maintains a website where she files the most recent EMR-related research.  Her website is fabulous!!!  You can find more information from this podcast with Nicolas Pinealt is a great introduction as well – he reviews many of the scientific, logistical, and economic and socio-political factors of this developing situation.  I also recommend his book.

As for the other alleged sacrifices, my own experiences have led me to the answer that’s true for me…which is: less screen time and less EMR exposure, giving my eyes, body, and brain a rest, and in some cases, such as in driving navigation, giving my brain proper exercise.  I’ve decided it’s time to go analog again—- or at least, as much as I can — without the fanny pack.

Here’s what I’m doing to reach this goal.  Maybe it will help you go a little more analog too.  The key is to prepare and equip yourself with some items that were par for the course in the 80s and 90s.

2. Instead of a smartphone or cell phone…consider a home phone.  Unless you have a horrible cell phone plan like I had, chances are that Spectrum or whomever offers internet and home phone services, will charge less for a home phone line than a cell phone.

First, an emergency back up cell

For emergencies or car breakdowns, I took my cheap Samsung smartphone to T.Mobile, and they ‘unlocked’ my smartphone, so I could begin service with them.  They offer a prepaid plan, which gives me either 30 minutes, or 30 texts, or a combination of both, each month, for $3.  AT&T Also offers a cheap plan, where you pay nothing for the days you don’t use the cell phone, but $2 for each day that you DO use it, and the minutes are unlimited.  With T.Mobile, I’m paying $36 for the entire year, plus a $10 activation fee.  Wowsers — I mean, that’s affordable!

In my area, home phone service cost $20.00/month when bundled with internet services.  It was interesting to discover that we no longer have reliable or usable analog telephone infrastructure.  Instead, the phone utilities only offer phone lines which are powered through the same wires as the internet.  I don’t truly understand the infrastructure, but I was informed that even if my internet goes down, my phone line will still work, as long as the electricity is still intact.

If you want an even cheaper monthly home phone bill, and are willing to give up your phone line in the case the internet goes down, you could try a VOIP service such as http://www.voipo.com. Voipo charges about $6/month for service which includes domestic and international calling.  They send you an adaptor, which you place in between the modem and the phone, connected with ethernet cables.

I discovered the hard way that you can’t use Voipo service with an ethernet switch box, so make sure your modem has two or more ethernet ports.  If you don’t know what I’m talking about, just trust me on this one for now.  If you’re not using a VOIP service, you don’t have to worry about this.

The hardest part about these step was actually finding an analog telephone that met my criteria.  I want to go analog, but with a few conveniences my grandma didn’t have.  Can you imagine not having voicemail?!!??!   Why an analog phone?  Cordless phones emit just as much radiation as a WiFi router.  If your cordless phone system has DECT technology, and all cordless phones in the US do, then it is extremely harmful.

The main convenience I want is speakerphone, so I can talk hands free if I need to write something down, without scrunching my neck and shoulder.  It is important that the speakerphone has clear sound quality – this is not a given, and I had to try a few phones before I found a good one.

Getting a few analog phones from Goodwill or eBay is a great idea, but I also use a corded phone with a digital answer machine system, which has a voicemail message waiting light alerting me when I have new voicemail.  I also like the speakerphone feature for when you need to talk hands-free.

Here are the two best analog phones I know:

If you can’t find that model, this one could work too…but I found that the numbers on the keypad have an annoying lag. 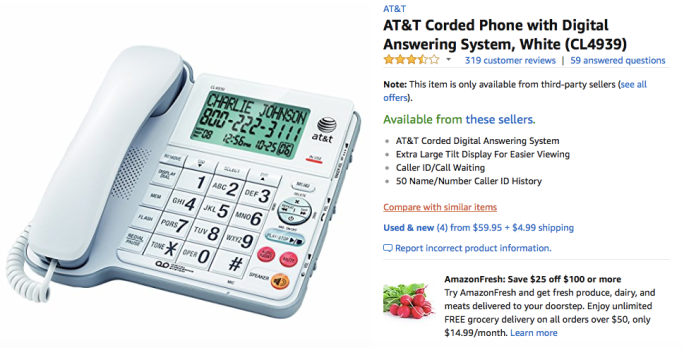 3. Instead of WiFi….hardwire your computer to your modem, using an ethernet cord.  Make sure that you get rid of your router altogether or turn off the WiFi.   As an additional bonus, I save $5 each month, as my providers charges less when WiFi is not used!

If you still have or use your router for some reason, make sure you disable the WiFi signals within the router itself.  Even if your internet service provider is not providing WiFi on their end,  you need to do to this.  All you need to do is determine the IP address of the router, type that IP address into your computer’s internet browser.  A digital control panel for the router, which should appear on your screen.  If you are asked for a username and password, it is often set as “admin” as a default.  Make sure you disable BOTH the 5GH WiFi signal and the 2.4 GH WiFi signal. 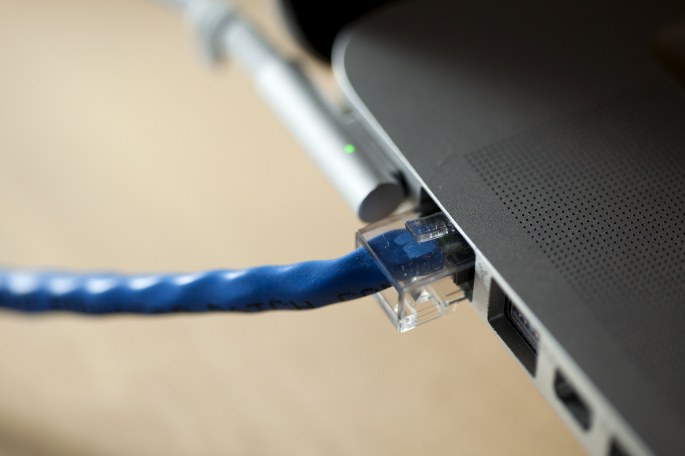 4. Instead of the harsh LED car headlights blinding you on at night…..well, I don’t know what to do about this one.

Perhaps the best thing we can do is ask our legislators to ban these blinding LED light headlight upgrades.  I’m not sure if any car manufacturers are actually selling cars with LEDs, but if they are, we need to demand that they stop.

5. Instead of a smartphone clock…..get a watch, and a house clock!

Impressions of a Holobiont

Impressions of a Holobiont