Do you want to have a TV in your home to watch movies with your loved ones?  I was on the fence a little bit, as I’ve never owned a TV as an adult…for 14 years.  During those years I didn’t want a TV because I wanted to focus on doing other things in my free time at home.  Due to changes in technology, I now have an additional concern about having a TV — most of them have a wireless antenna which will radiate me and damage my health.  Most people use the TV’s wireless capability to connect to the internet wirelessly to get all sorts of channels like YouTube, AmazonPrime video, and more, but you don’t have to use it this way.  You can still get all of the same channels and function, without using the wireless antenna.

Many people accuse those of us aware of EMFs’ destructive effects, of being backward, and rejecting all modernity and technology.  I’ve heard comments like ‘why don’t you go live in a cave then?’  I don’t need to go ‘live in a cave’….I just need to use technology safely.  I use several devices, but I hard-wire them rather than using the wireless antenna function.  I achieve this by connecting the device to my modem and non wireless switch-router via shielded, cat6 ethernet cable (sold by Electrahealth.com), and disabling the wireless antenna in the device.  In order to do this too, your device MUST have an ethernet port! 🙂   So make sure that the TV you buy HAS one!

A wonderful friend gifted me a TV, and although it has the typical ‘smart’ wireless capability (antenna), it also has an ethernet port.  Sometimes, we CAN have our cake and eat it too!  I’ve had a lot of relaxing nights sitting next to someone I love, learning about all kinds of interesting things via movies and documentaries, and sometimes, a good comedy show.

I’m going to share how we disconnected the wireless ‘smart’ antenna in the 43″ inch TCL CLASS 4-SERIES 4K UHD HDR ROKU SMART TV, model 43S425.  If you have a different model, look up the specs and diagrams on line for the model you have…it may seem daunting, but once you take the panel off your TV, you’ll realize you can do this.

First, make sure that you know which part of the TV to disassemble.  Unscrew several screws on the back.

Close-up of the bottom after we removed one of those screws:

Now you are ready to open your TV.  Be careful though!  There are wires connecting the back panel you will be taking off, and the components attached to the other part of the TV.  So, open slowly… 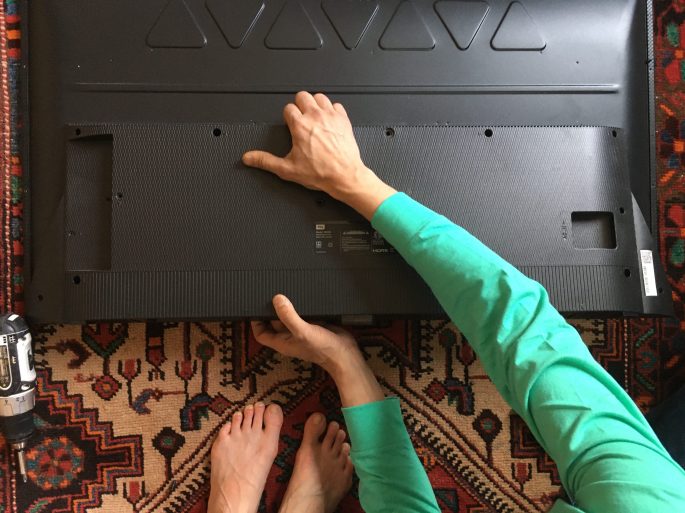 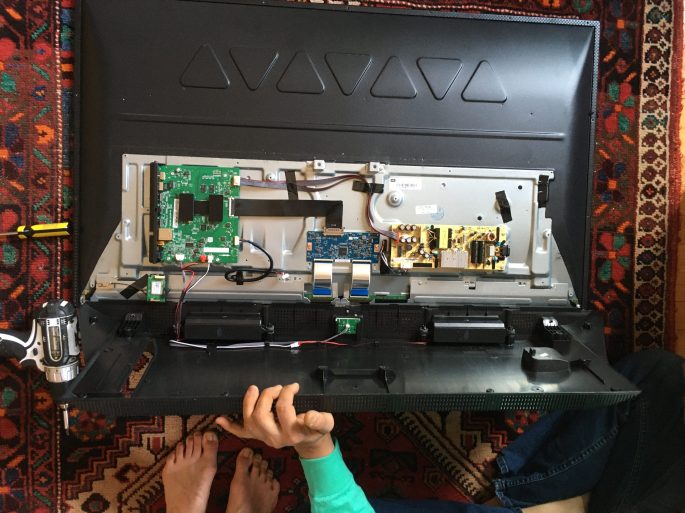 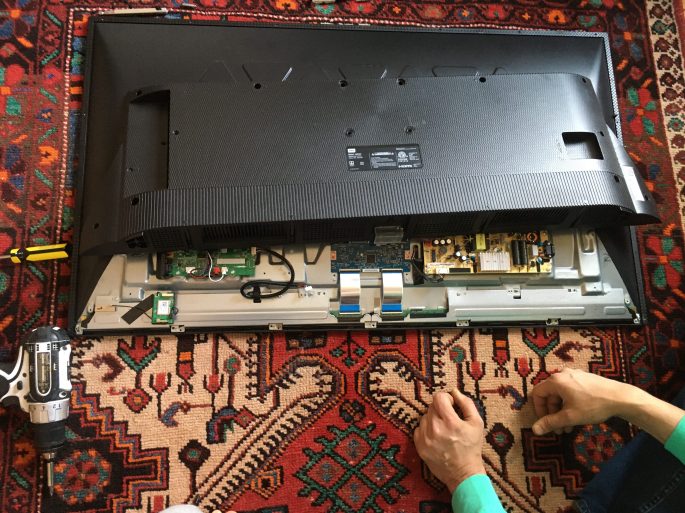 Tuck the end of the black wire away underneath itself, and you are done!  Put the panel back on, and put the screws back in! 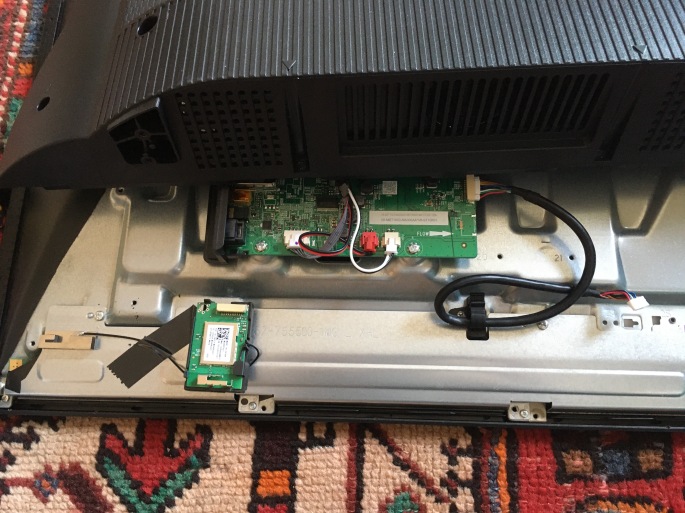 I hope you enjoyed this tutorial, and I hope it inspires you to not be afraid to take apart your devices too — wether it is a printer, a TV, a cell phone, or a laptop.  By removing the wireless antennas, we remove the chance that the wireless function will accidentally be turned on.

Have a great week,

One thought on “Enjoy a flat-screen TV – but ditch the radiation! How to remove a wireless antenna.”